Few things are as strong and pure and as the love and devotion dogs feel for their humans.

Max is a 17-year-old Blue Heeler mix and despite his advanced age, he stopped at nothing when it came to protect his sweet, 3-year old human Aurora.

One evening, little Aurora who lives in Queensland, Australia, waddled off into the bushland and vanished.

Many people have walked off into the Australian bush and never returned, so when her family discovered that little Aurora had disappeared, panic ensued.

A large search party was formed, consisting of police, her family and other members of the local community.

Over a hundred people helped in the search, but one of the most invaluable keys to finding Aurora turned out to be the family’s deaf and partially blind, senior pup, Max.

Max had bravely followed Aurora as she wandered off, and while everyone was looking for Aurora, he was doing his utmost to keep her safe. 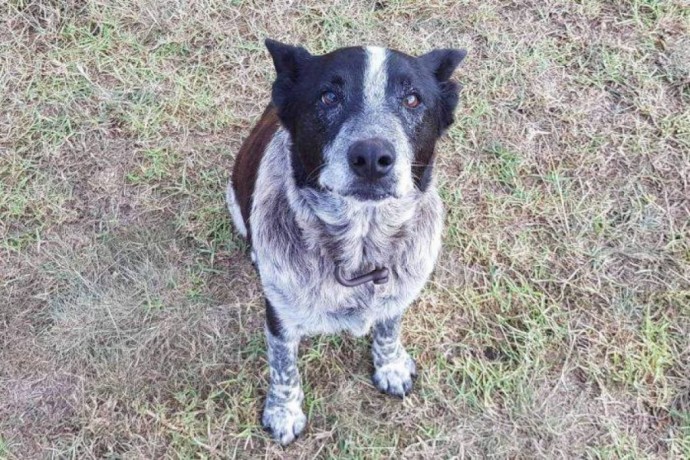 The search for Aurora went on for hours, and with every passing hour, the feelings of dread and worry grew stronger.

Aurora had wandered off with nothing more than a thin pair of pants and a thin t-shirt on, and a cold rain was pouring down.

After 15 hours, thinks were looking bleak.

But then, Aurora’s grandmother, Leisa Bennet, suddenly heard something.

Bennet thought she heard Aurora calling out, and she ran up a mountain in pursuit of the voice.

That’s when Max suddenly showed up, ready to lead her to Aurora.

Max, despite being both deaf and partially blind, lead a group of search party members up a steep hill where Aurora was curled up, cold and tired

For over 15 hours, Max had waited by Aurora’s side, keeping her safe while they waited to be found.

He’d curled himself around her to keep her warm and when he heard her rescuers nearby, he rushed off to lead them to her.

Thanks to Max, Aurora was found alive and well, without any injuries.

The local police posted pictures of Max to their Twitter page to celebrate his bravery and everyone is showering the heroic pup in love and appreciation. 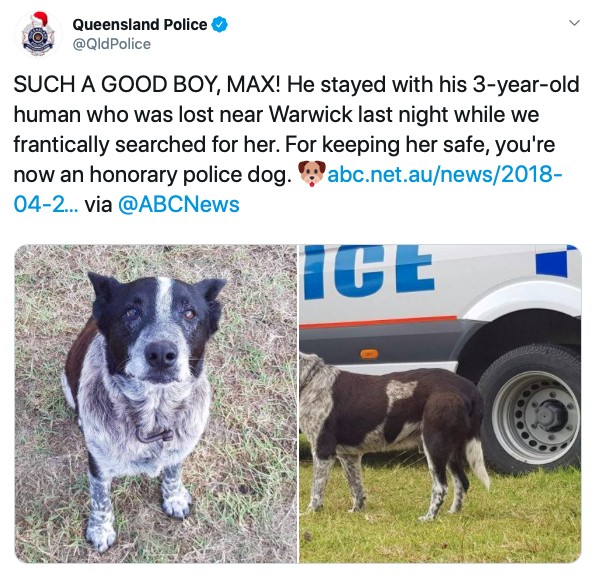 Max’s has been rewarded for his bravery and loyalty by being declared an Honourary Queensland Police Dog.

However, we’re sure that for Max the greatest reward is knowing that his beloved Aurora is safe and sound.